2021 brought many challenges to the ranch industry, including severe drought to much of Montana. With drought conditions typically leading to less winter snowfall, many ranchers have been worried about a lighter winter snowpack and a potentially difficult growing season ahead.

The good news for farmers and ranchers is that at the start of the month forecasters were still predicting above normal precipitation for February. December showed some gains for the snowpack level in the state, but despite close to normal precipitation levels in January, warmer temperatures and little precipitation near the end of the month left almost all the major basins with below average snowpack levels according to the U.S. Department of Agriculture. With snowpack typically peaking in April to May, there is still time in the season to make up for low levels of snowfall. According to NRCS Hydrologist Eric Larson, as reported by KBZK Bozeman, “Most locations are still only one large storm short of a normal snowpack.” 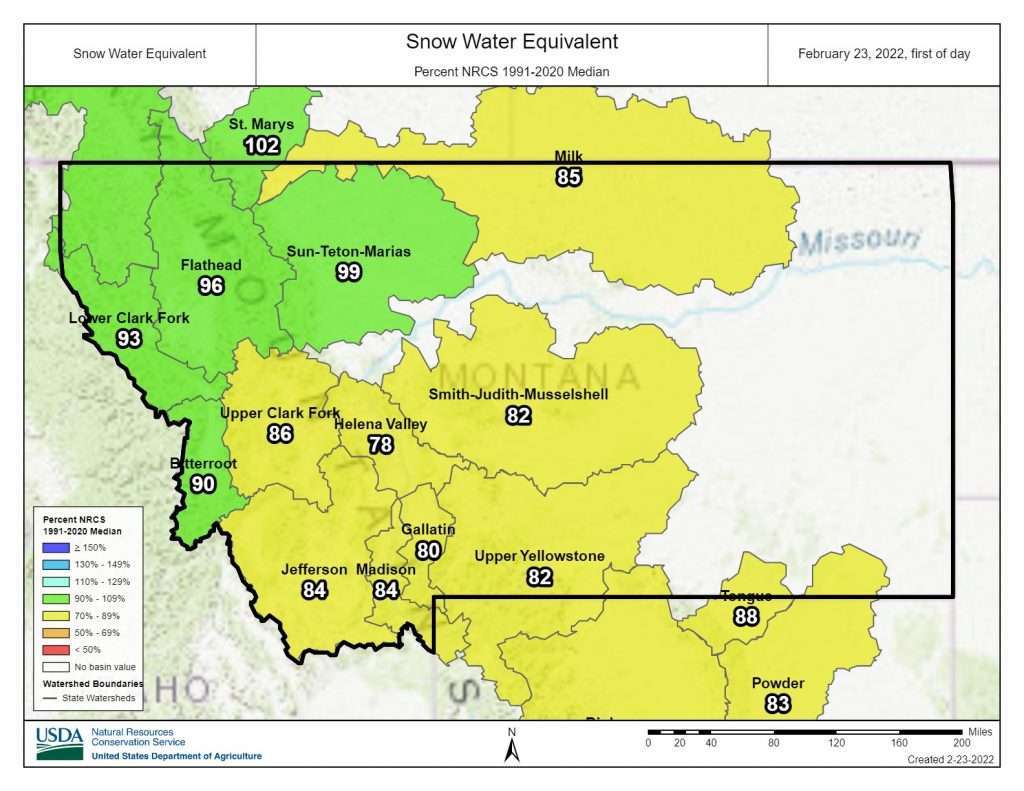 The last quarter of the year was wrought with higher than normal temperatures and lower than normal snowfall levels. Conditions were made worse by abnormally high winds and low humidity in November and December. The snowpack acts as a natural reservoir for water; and with the right temperatures in late spring and early summer, there is plenty of snowmelt in the summer to keep Montana’s rivers, streams and reservoirs in good condition. The heaviest snowfall in Montana is usually between November and March, and precipitation levels and temperature are important predictors of conditions for the upcoming growing season. Over the last decade Montana’s temperatures have been steadily climbing, leading to more precipitation in the form of rain than snow. High temps can also cause snowpack to melt sooner, leading to drought conditions in the later summer months.

“The severe drought in 2021 makes it necessary to adjust grazing management not only for 2022 but into 2023, especially for pastures that will be grazed in spring and early summer of 2022 or 2023.”

With an unpredictable growing season ahead, well-prepared Ag producers have drought management plans in place. As they evaluate the potential impact to their water sources, many producers are considering changes to stocking rates and creating lists for culling priority. Hay prices were already high in 2021, and recent drought conditions suggest they will remain high into 2022, making alternative plans for grazing even more important.

It may be too early to determine what the summer growing season will look like yet, but if drought conditions continue there may be a number of ranch properties coming on to the market in the near future. If you’re considering selling your ranch or want to understand the value of your property, talk to one of our brokers and find out how we can go to work for you.

Looking to be the first to know about new to the market listings? Give us a call: